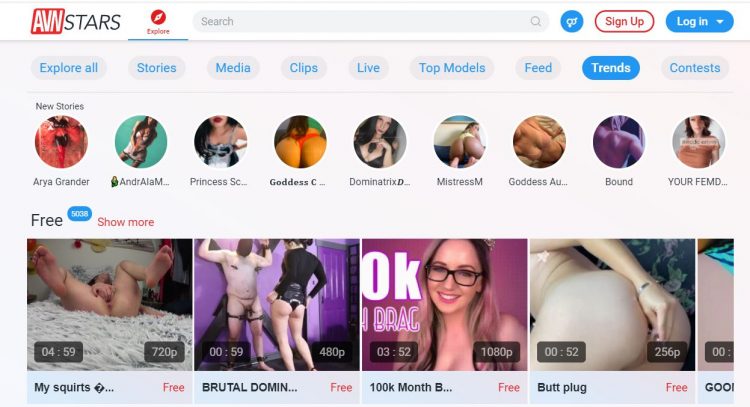 Adult Video News is well-known to anybody who works in the adult entertainment industry. AVN was founded in 1983, and it's dedicated to the movers and shakers and the up-and-comers in the adult media industry.

An essential requirement is that performers and anybody involved in their material must be at least 18 years old. Performers who wish to be compensated will be required to submit a W9 tax form if they reside in the United States and present proof of their age.

AVN Stars is quite forthright in embracing anyone to the community regardless of their gender or sexual orientation. Individuals are not the only ones who may use the platform; companies, producers, and recording studios can also use it.

This is fantastic news because networking is just as crucial as wooing and pleasing fans, having all of those companies, creators, and talent agencies right there with you on AVN Stars. It could result in a few tasty meetings of the minds—and perhaps even the creation of entirely new business opportunities—in the future.

Is there a cost associated with using AVN Stars?

There are no charges or costs associated with utilizing the platform, as there are with OnlyFans and all other sites that operate on the same basis. AVN Stars also makes its own money in the same way they do, by getting a cut of whatever their performers earn.

If you were worried about that, please take a deep breath because it is only a minuscule 20 percent, enabling content producers to keep 80 percent of any revenue they make.

More importantly, AVN Stars offers a very appealing referrals scheme, which has the potential to boost earnings by an additional 5 percent if a fellow performer joins the network.

Is it possible to make a lot of money with AVN Stars?

Well, it all depends on how large your following is. How much of that following can generate into paying members, what you are doing to keep them happy, and how much time and energy you put into acquiring new followers.

A significant part of this is providing the performer with various avenues through which to get your work out there—novelty and adaptability being well-established methods of acquiring and keeping the audience interested.

Payouts are made on a daily basis—and yes, you did hear me say that. Yes, while just a few (very few) platforms allow artists to do this. It is usually at a high expense to the company.

However, receiving money by Paxum or ACH might take up to a week or more. Nonetheless, even with this latency, collecting money when they want rather than according to the timetable that the site establishes might aid performers in managing their earnings.

Subscriptions: There's nothing particularly innovative about this, which is far from a criticism of them given that this is exactly what these and all of the other sites are all about.

Fund Me: Similar to tipping; this service allows fans to encourage performers by donating whatever amount they are prepared to spend. Of course, you may also oil their wheels by using whichever method you believe would be most effective for you.

Clips: if you have them, you may entice your followers with a selection of pay-per-view clips if you have them. As previously stated, AVN Stars does not offer anything particularly novel. However, they claim to have one of the most user-friendly interfaces out there, allowing performers to simply create a clip and then drag and drop it onto the site, after which they can choose how much they want to charge their fans.

Live Video: For anyone unfamiliar with the term, live video refers to live streaming. This is where things become interesting since only two or three adult sites offer this feature.

AVN Stars also support Geo-blocking. For those unfamiliar with this, it allows artists to refuse access to their stream based on the location of the person who requests it. It may not seem like a huge issue. Still, if you're living in a nation that isn't particularly receptive to explicit material, this may actually be a lifeline in some circumstances.

No one understands more about the pornographic business sector than AVN. Considering all of this and the fact that some sites provide more monetization opportunities and other beneficial features than others, I believe that you should sign up with AVN Stars—with the added bonus that it may serve as a fantastic tool in terms of pleasing fans who are seeking explicit content.